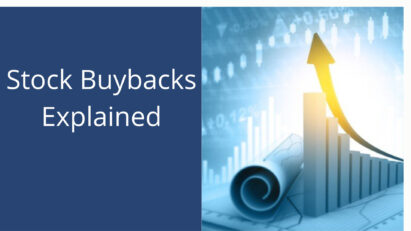 The Canadian government recently introduced a new tax on stock buybacks that will take effect in 2024. They expect the new tax to generate $2.1 billion dollars over 5 years and said the intention behind the tax is to encourage reinvestment into employees and businesses. However, pundits aren’t convinced the intended effect will actually come to fruition, and are concerned that the cons of the new tax bill may outweigh the pros. We look into stock buybacks in the hopes of understanding the second order effects of this new legislation and what it means for Canadian investors.

What are stock buybacks?

A stock buyback occurs when a company offers to pay shareholders the current market value for their shares to absorb a greater percentage of ownership within the business. Shares can be repurchased from the open market or from shareholders directly, and in recent decades share buybacks have overtaken dividends as a preferred way to return value to shareholders.

Companies repurchase shares for various reasons. One is to consolidate ownership. If a company has issued thousands of shares to different shareholders, it has thousands of different voting owners who all get a say in the company’s future decisions. By buying back shares, this reduces the number of owners, voters, and claims to capital in the business. Another reason for companies to do a buyback is if they believe their company is undervalued and expect the stock price to grow in the future. For example, in 2010, companies that saw their stock prices drop significantly after the financial crisis saw this as an opportunity to buy back shares while they were cheap. Then, as the economy recovered and valuations improved, these same companies could reissue shares at a higher price and increase their equity capital without diluting ownership for existing shareholders. Repurchasing shares also makes the business seem more attractive to investors. 2 key metrics that investors use to evaluate the viability of an investment is the EPS (Earnings per Share) and P/E (Price to Earnings) ratios. Both ratios improve if the number of shares outstanding is reduced, and if all else remains the same this will typically lead to an increased share price.

Another reason for a share buyback is that mature companies may not have anything better to do with their retained earnings. Companies essentially have 5 ways to allocate leftover profits once all expenses to run the business are subtracted.

Share buybacks are traditionally seen as a less risky capital allocation decision than investing in research and development or making an acquisition. As long as the company continues to grow and buybacks don’t drain cash reserves that are needed for operations, the valuation will rise assuming good economic conditions. Additionally, when comparing dividend paying stocks with stocks that primarily repurchase shares, the latter tends to outperform when the economy goes into a recession. The reason for this is that a dividend paying company may be forced to cut its dividends to preserve cash in a market downturn, which would undoubtedly lead to a selloff in the stock. However, if the same company preserved cash by simply buying back less stock, this would have less of an impact on the stock price in most cases. Therefore, even though committing to dividend payouts with steady increases may drive a business’s stock higher, in the event of a market downturn, stock buybacks can be reduced more easily than dividends, and with a much lower negative impact on the share price of the company.

There are downsides to repurchasing stock, particularly when the company finances this through debt. It is very common for companies to repurchase shares using debt as all interest payments on the loan are tax deductible. However, increasing leverage within a company also makes it more vulnerable in economic downturns or when interest rates rise. Therefore, credit rating agencies will typically view debt financed buybacks negatively, which could lead to a downgrade in credit rating, making it more difficult for the company to secure debt financing at affordable interest rates. Overall, companies are utilizing their cash reserves to buy back stock, limiting the liquidity available to invest in other aspects of the business or repay debt, therefore in some cases it can be a bad way to allocate capital, especially if the company already has a somewhat limited runway.

Now that we understand stock buybacks and why companies implement them, we can examine what effect they have on the overall economy. Buybacks have a positive impact on the economy as they push up stock prices, which typically increases consumer confidence, consumption and large purchases due to “the wealth effect”. Essentially, as consumers see their net worth grow due to growth in the financial markets, they will typically increase their consumption as well. As consumption grows, GDP, the most common measure of economic well-being, grows as well. Additionally, growth in the financial markets typically leads to lower borrowing costs for corporations, who are then more likely to invest in expanding operations, hiring new workers or increasing existing wages, improving household balance sheets. Moreover, lower borrowing costs translate to lower mortgage rates, which makes purchasing a home less expensive.

How does the new tax affect stock buybacks?

The Canadian government plans on initiating a 2% tax on the net value of all share buybacks by public corporations in Canada. It says that this will encourage corporations to reinvest their profits in their workers, however it isn’t clear if this will actually be the case. For example, Canadian oil and gas companies have been buying back stock at a record rate this year due to record profits from the high oil prices. A stock buyback tax makes it less attractive for these companies to buy back shares, while oil and gas producers from other countries can continue to buy back shares at their current levels. This makes Canadian producers less attractive relative to their peers, potentially reducing investment in the space. This doesn’t just apply to the oil and gas sector, as share repurchases are common in most mature industries, meaning this new tax could reduce investment in Canada altogether. On top of this, in Canada capital gains are taxed more preferentially than dividends. By increasing the cost of repurchasing shares for businesses, companies are more likely to return cash to shareholders in the form of dividends. For investors, this means losing a higher percentage of returns to tax, hurting the long-term returns of retirement portfolios for both retail investors and investment institutions such as pension funds. Overall, even though Canadian companies have been more dividend focused historically than their peers in other countries, this new tax may lead to less investment in Canadian businesses and higher tax bills for individual investors, reducing the long-term returns of portfolios across the country.

Stock buybacks are one of the most common ways for businesses to return capital to shareholders. Despite its intended effect, the new stock buyback tax may have some unforeseen consequences that actually reduce investment in Canadian companies and increase tax liabilities for Canadian investors. However, until the tax is actually introduced in 2024, it’s impossible to predict whether this will be a net positive for the Canadian economy, or if the potential consequences outweigh its benefits.