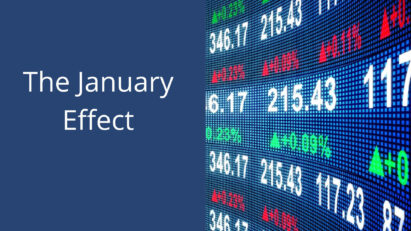 Last year was pretty rough for stock and bond markets, but January may bring some respite even if only for a month. The January Effect refers to the theory that stock prices tend to increase more during the month of January than during other months of the year. In this article, we review the reasons why there may be better returns in January compared to other months, how this applies to different areas of the market, and why this ultimately impacts retail investors.

The Origins of the January Effect

The January Effect was originally discovered by an investment banker named Sidney Wachtel in 1942. He noticed that market returns dating back to 1925 showed greater gains in January than other months, and as he studied the theory closer it appeared that the outperformance was more significant in smaller companies than larger ones. There are several reasons as to why returns may be better in January than in other months.

First of all, in December many investors sell investments that have lost value over the course of the year for tax loss harvesting. By selling investments at a loss, asset managers offset realized capital gains, lowering their overall tax bill for the year. This prompts a sell-off in December, but since these investments are only sold for tax purposes, most are repurchased in January, and the increased demand leads to higher prices.

Another explanation for the January effect is known as window dressing. At the end of any year, portfolio managers publish an annual report including their investment holdings and how they have performed over the course of the year. In order to make their funds’ annual reports look better, they will sell risky positions in December so that they aren’t included in the report, only to repurchase them in January, leading to higher prices in the new year. Finally, when corporate executives receive year-end bonuses in December, they typically invest a portion the following month in January. Overall, there are various reasons that stocks have increased demand in January compared to other months, and basic economics says that increased demand should lead to increased prices all else staying equal. However, the market is a complex system with thousands of variables determining stock prices, therefore we can only really determine if the January effect is real by examining historical returns.

Is the January Effect Real?

The market has evolved significantly over the last century. For this reason, analyzing the performance of stocks in the 1930s won’t bear much relevance to determining if the January Effect is real. If we look at returns since 1993, there have been 17 winning January months and 13 losing months, meaning the odds of seeing positive gains are barely higher than simply flipping a coin. Even between 2009 and 2022, where the market saw a prolonged bull market with valuations expanding, only 8 of the January months saw positive gains while 6 were negative. This indicates that while the January Effect may have existed in the earlier eras of the stock market, as the market matured the aforementioned factors started becoming priced into stock valuations, and the effect slowly dissipated.

Despite this, some analysts have argued that while overall stock market performance may not be better in January than other months, smaller companies tend to outperform their larger counterparts in January. Since shares of smaller companies are less liquid, the factors mentioned above have a greater impact on the share price than larger companies. Additionally, individual investors disproportionately own small stocks compared to institutional investors, and are more likely to sell off these positions for tax loss harvesting. It’s important to note that smaller cap companies have historically outperformed larger companies over the long run, which makes sense as investors in less established companies are taking on more risk and need to be compensated for that additional risk. With this in mind, smaller stocks must outperform larger companies by a statistically significant margin in January in order for the effect to be considered legitimate.

Over the 95-year period between 1927-2021, in the month of January smaller stocks outperformed larger stocks by 2.1%, much higher than the premium in all other months of just 0.2%, indicating the January Effect may actually be legitimate. However, as mentioned previously, the market has evolved significantly over the last century, therefore data from the earliest days of the market shouldn’t be considered to determine if the January effect is still relevant. When looking at the 30-year period between 1992-2021, smaller stocks outperformed larger ones by 0.8% in January compared to 0.1% in other months, a much smaller premium that is no longer as significant. If you condense this even further to the 20-year time period between 2002-2021, smaller companies outperform large caps by only 0.4% in January compared to 0.2% in all other months, an insignificant difference. Overall, the pattern is clear, even though the January effect was prevalent in the early days of the market, as the market became more efficient, the effect dwindled to the point where there is no real difference in stock performance in January compared to other months.

The market has increasingly gotten more efficient due the decreasing cost of executing trades and the rise of high frequency trading companies. With this in mind, it has become much harder for active management to generate higher returns than simply investing in general market indexes like the S&P 500. The dwindling of the January effect is just one example of this, and retail investors should view this as another reason that investing passively may lead to better returns in the long run than actively trading securities.