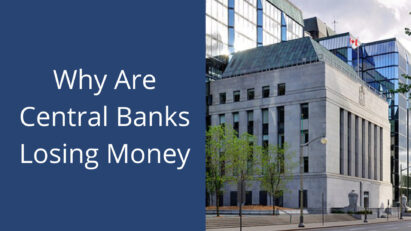 Why Are Central Banks Losing Money?

For the first time in recent history, North American central banks are losing money. The Federal Reserve and the Bank of Canada have both raised interest rates substantially in 2022 to fight record inflation, but this has consequences for their profitability. In this article, we’ll explain how restrictive monetary policy has led to a predicted deficit of up to $200 billion for North American central banks, and what impact this has on the economy and capital markets.

Contents hide
How do Central Banks Make Money?
What has Changed in 2022?
What impact does this have?

How do Central Banks Make Money?

Central banks make money by providing services to financial institutions and generating interest income from securities they own. Many large financial institutions also lend money to central banks in exchange for interest. In Canada, this is known as the overnight rate. Historically, the income generated from securities exceeds interest obligations on deposits, leading to a substantial profit. Any profit left over after paying expenses goes to the government’s treasury, which helps reduce the budget deficit for that year. For example, in 2021 the US treasury received about $90 billion from the Federal Reserve, and the Bank of Canada has usually contributed a more modest, but still substantial, $1 billion to the federal treasury every year.

Monetary tightening has reversed the profitable trend. With central banks raising rates to combat high inflation, the interest payments required to service deposits have increased substantially. For example, the Federal Reserve went from paying 0.25% on $2 trillion worth of deposits to paying 4.25% at current levels, a 17x increase. Simultaneously, central banks have been reducing the size of their balance sheet after they grew exponentially in response to the COVID pandemic. When financial markets crumble, central banks are in many cases the buyer of last resort. In 2020, the Bank of Canada and the Federal Reserve purchased government bonds, stocks, and corporate bonds at unprecedented levels. This process is known as quantitative easing, and while it was necessary to avoid a deeper economic recession, it contributed to the high inflation that we are seeing in 2022. To combat inflation, central banks have been reducing the size of their balance sheets, a process known as quantitative tightening. To do this, they reduce the number of securities they own, which reduces the amount of interest income being generated. Overall, the substantial increase in expenses in tandem with a significant reduction in income has led Central Banks to trend towards unprofitability. The losses aren’t small, as it is expected that the Federal Reserve will lose up to $180 billion over the next 3 to 4 years. The graphs below illustrate the historical profitability of the Federal Reserve and the Bank of Canada. 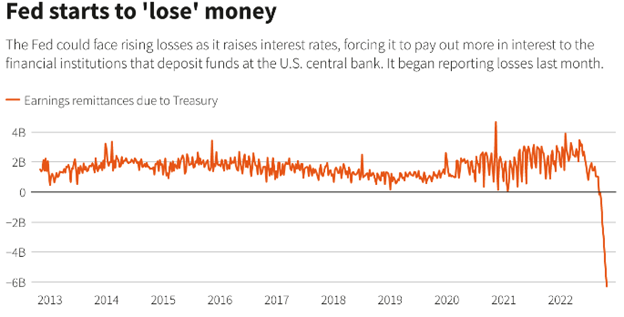 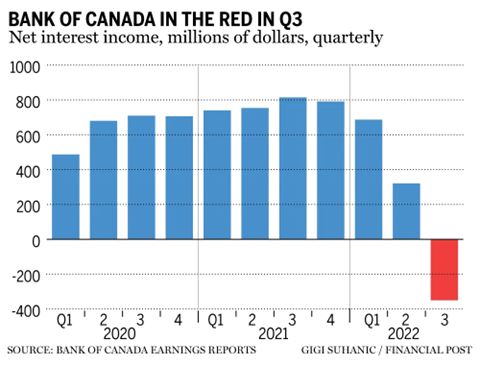 What impact does this have?

It’s unlikely that the unprofitability of central banks will impact their ability to conduct restrictive monetary policy. The Federal Reserve accounts for this negative income using an accounting measure called a deferred asset. Therefore, since the Fed expects to return to profitability eventually, they will simply cover the loss that is incurred during the next couple of years with future profits. However, on the political front the lack of a deficit reduction tool may become a flash point. The profits generated by central banks have historically served as a budget deficit reduction tool. Now that this is no longer the case, the government may need to cut back spending on social programs and infrastructure investments to avoid increasing debt levels at an accelerated pace. Higher borrowing costs make this situation even more difficult, as the government is already facing a higher interest expense in 2022 than it has seen in recent history. With all this in mind, if fiscal spending is reduced, this would have a negative impact on the overall economy, and this will have repercussions for capital markets.

It’s important to note that the size of the loss is dependent on how long interest rates stay this high. Inflation has come down from its record highs in the past couple of months, which has led central banks to signal that rate hikes could soon be paused. If inflation comes down quicker than expected, central banks may pivot and begin decreasing interest rates, which will reduce the interest they pay on deposits. On the other hand, if inflation is stickier than anticipated, central banks may lose much more than they are currently projecting as interest rates will need to stay high for longer. At this point, it’s unclear what path inflation will take, and how quickly central banks will become profitable again.