The Registered Retirement Savings Plan (RRSP) is a helpful tool for investors to maximize their savings for retirement. Investors can invest in an RRSP and receive a tax rebate at the time of investment. They can later withdraw the funds at retirement and pay tax on the withdrawals as regular income. Withdrawals can be made even before retirement, but they are subject to a withholding tax, which can be up to 30% of the amount of withdrawal.

Investors have a limit of how much they can invest in the RRSP accounts registered at their name of at the name of their spouse or common-law partner. The limit is equal to 18% of the income from the previous year, or up to a specific dollar limit (which is $29,210 for 2022), whichever is less. However, if they have unused contribution room from previous years, it will be carried forward to the current period and it will be added on top of this limit. The contribution limit is also available at the CRA MyAccount portal online.

For a more in-depth discussion regarding RRSPs, please refer to our article about the basics of RRSPs.

There are further late-filing penalties if the investor does not file the T1-OVP form in the first 90 days of the calendar year after the year of the over-contribution. The penalty is an additional 5% on the amount owing plus 1% for each additional month of delay, up to 12 months. The CRA will also charge interest on the unpaid tax and late-filing penalty starting on the 91st day of the new year.

Thus, an individual who has overcontributed should pay the corresponding penalty and submit the T1-OVP form as soon as possible and in the first 90 days of the new year; otherwise, the CRA will impose significant penalties.

Below you can find a sample T1-OVP form filled with the information of a fictional investor John Smith who has over-contributed $10,000 for his RRSP. The form has few more parts in the next pages for a detailed summary of the movements in the RRSP accounts to determine if the unused RRSP contributions are subject to tax. 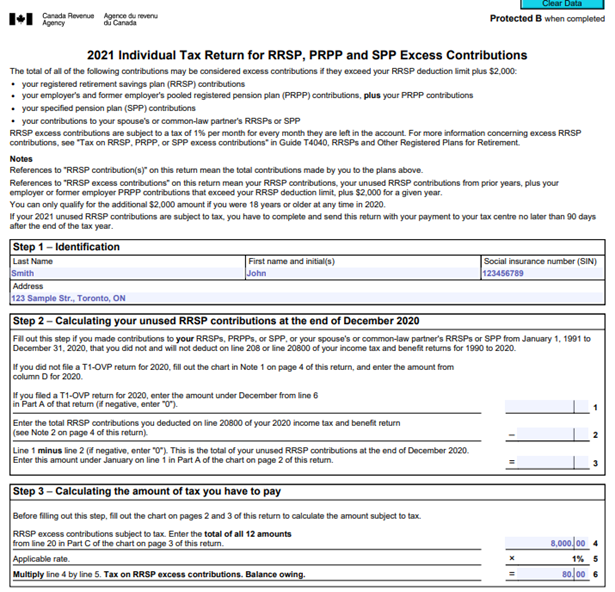 If the individual notices that they have over-contributed to their (or their spouse’s) RRSP in the current year, they can withdraw the extra funds so that the net contributions are within the allowed limits. This will, however, result in withholding taxes because the individual is withdrawing funds before retirement. Furthermore, the over-contribution amount that is taken out of the RRSP now will be taxed as income in the following year.

There are a few things than an individual can do to prevent or minimize their taxes for the over-contributions.

The process of applying for the tax waiver involves submitting the RC2503 form. The individual will have to attach proof of their contributions as well as proof that the over-contribution has been a reasonable error.

The figure below shows the RC2503 form filled with the details of a fictional investor John Smith. The individual must also attach all relevant documents listed in the form and provide a full explanation of why the over-contribution is a reasonable mistake as well as proof that there has been a reasonable effort to eliminate the over-contribution. If the form is rejected the first time, it can be submitted for a second review.

4. Waive the Tax Deduction for the Withholding Taxes

One can also waive the withholding taxes by submitting the T3012A form. If the CRA certifies it, the individual will be allowed to withdraw the funds without paying the withholding taxes. However, the individual will still owe the 1% for each month until the funds are taken out, so it is recommended that this form is to be submitted as early as possible.

A sample completion of the T3012A form for a fictional investor John Smith is presented below. The form consists of an additional part to request the refund from the RRSP issuer. This part is to be filled once the CRA approves the waiver. 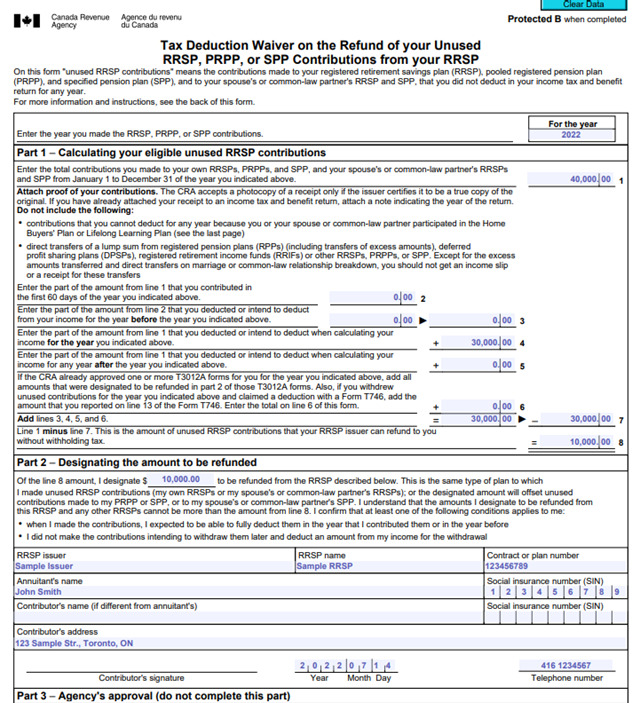 There is an exception in which the over-contribution is not penalized. In cases of HBP (Home Buyers’ Pay) repayments to a previous withdrawal of money from the RRSP, the over-contributions that are a result of these repayments will not incur the penalty tax. However, these funds should be designated as such in the appropriate tax year; otherwise, this option may not be available.

The RRSP has a very specific limit of how much one can contribute in a given year. If one contributes more than that, then they have made an over-contribution. If the over-contribution is higher than $2,000, it will be subject to a 1% tax accumulated monthly. An individual can withdraw their funds if they notice the mistake early enough, and they can potentially waive their taxes by submitting the RC2503 form proving the over-contribution has been a reasonable mistake or the T3012A form to waive their withholding taxes for withdrawing money before retirement. Otherwise, they can pay the tax of 1% monthly and submit the T1-OVP form within 90 days of the start of the calendar year after the over-contribution has been made. If action is taken later than that, the individual will bear additional charges. Thus, one should be very proactive if they notice that a mistake has occurred and there is an over-contribution to their or their spouse’s RRSP.