The Value of Predictions

We are approaching the end of the year which means that banks and large asset managers are producing their 2023 forecasts for the performance of stocks, bonds and pretty much any security on the face of the earth. So it’s a great time to remember the cardinal rule of finance – nobody knows anything.

The median Wall Street forecast from 2000 through 2020 missed its target by an average 12.9 percentage points which was more than double the actual average annual performance of the stock market.

Two years ago, the median forecast for the closing level of the S&P 500 in 2021 was 3,800, according to a Bloomberg survey. By the end of the year, the index closed at 4,766.  That placed it 25 percent above the median year-end forecast!

The Wall Street consensus in the beginning of this year was that the index would sit at 4,825, which would represent a minor increase over the course of the year. The S&P500 closed at 3,990 yesterday.

For 2023, the average forecast by strategists tracked by Bloomberg calls for a decline in the S&P 500, the first time the aggregate prediction has been negative since at least 1999. Most of them turned progressively negative as the months passed.

None of this is new. In a seminal study from 2012 researchers from the University of Waterloo and Boston College reviewed over 11,000 analysts from 41 countries and found out that the overall accuracy of price targets was about 30% for a 12-month horizon – less than flipping a coin.

What the study also found was that analysts often alter their targets simply because the appetite for stocks has changed and not for fundamental business reasons. This is playing out right now too.

For the first time in decades that Wall Street sees stocks actually falling. What’s interesting is that this looks like a reaction to the current bear market as much as analysts’ belief about the future. 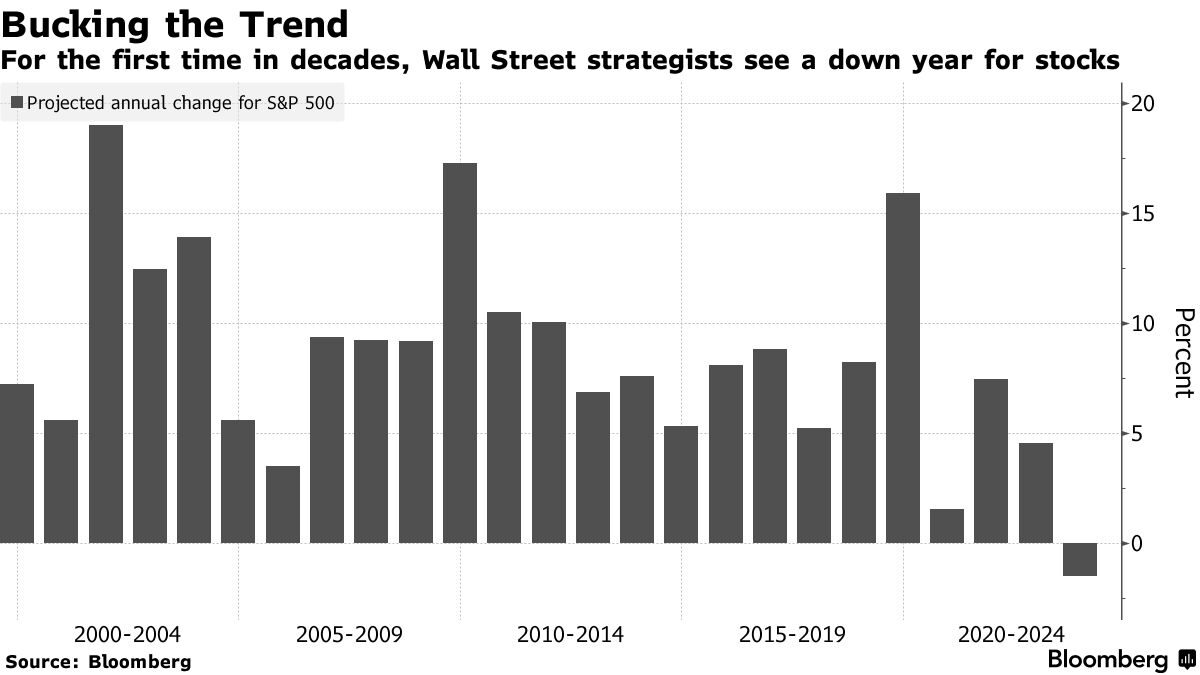 Flip-flopping like this is not unusual even by people who should know better. Take for example Jamie Dimon, the billionaire banker who has been the chairman and chief executive officer of JP Morgan Chase – the largest American bank – since 2005. In the beginning of the year he predicted the best economic growth in decades.

“We’re going to have the best growth we’ve ever had this year, I think since maybe sometime after the Great Depression,” Dimon told CNBC’s Bertha Coombs during the 40th Annual J.P. Morgan Healthcare Conference. “Next year will be pretty good too.”

Stock markets dropped over the next 5 months and his conviction evaporated. By June 1st he had changed his tune and claimed that the economy is facing a hurricane of bad news that will culminate in a painful recession.

“You know, I said there’s storm clouds but I’m going to change it … it’s a hurricane,” Dimon said Wednesday at a financial conference in New York. “You’d better brace yourself,” Dimon told the roomful of analysts and investors. “JPMorgan is bracing ourselves and we’re going to be very conservative with our balance sheet.”

Nothing happened in the following six months which must have relaxed him because nowadays he is predicting a mild recession.

If the most powerful American banker has no clue what is happening in the moment, let alone in the future, then nobody knows. That should be obvious, but sometimes it’s easy to forget.