The Active Versus Passive Debate

The active versus passive debate has been ongoing for nearly 60 years but really gained steam since the 2008 recession. The financial crash and resulting stock market collapse scarred a large number of investors and made them lose faith in mutual funds and their ability to perform through market downturns. Couple that with a growing body of research that showed that active managers couldn’t consistently beat their benchmarks over the long-term and investors started questioning the entire mutual fund industry.

This resulted in the migration of trillions of funds out of actively managed investment products and into passive indices and exchange traded funds (ETFs). In 2008, US investors had around $500 million invested in ETFs. Today this number has grown more than tenfold as the graph below illustrates. 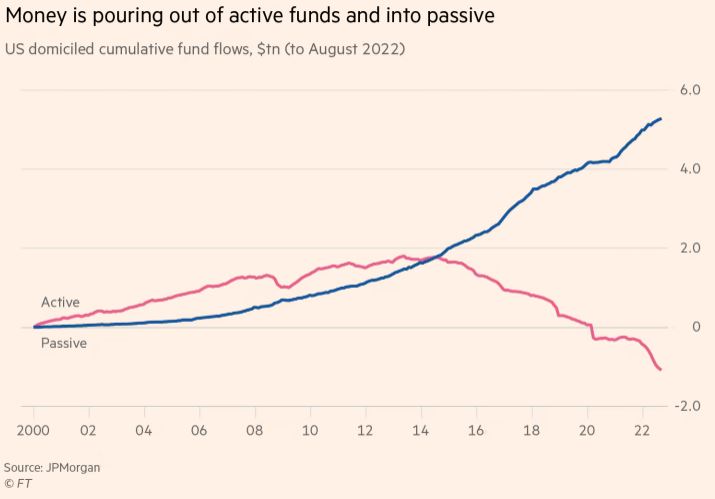 So, what is this debate exactly? Active investing refers to trading securities in an effort to find the ones that will perform well over time. An actively managed fund would usually have a team of portfolio managers who would analyze potential investments based on their cash flows, future growth prospects, etc. They could have specific criteria for portfolio construction such as growth or value investing, or a focus on the size of the potential companies they would invest in such as small-cap or large-cap stocks. Most importantly, the buying and selling activity is based on the portfolio manager’s judgment. When an investor places money in a mutual fund, he is essentially hoping that the portfolio manager has skill at evaluating good investment opportunities.

This brings us to the next question – how come ETFs have become so popular? The answer is that there is overwhelming evidence that actively managed mutual funds have a very hard time generating performance better than their benchmarks. These benchmarks are simply the indices that ETFs are based on. For example, a mutual fund that invests in large-cap US stocks will be benchmarked against the S&P500 index. From the investors’ perspective, it is important to evaluate the fund’s chances of beating its index, because the index represents the investor’s opportunity cost. If the investor doesn’t have strong conviction in a portfolio manager’s ability to beat the S&P500, the investor has the option to simply buy a low-cost ETF that tracks the index and call it a day.

Since the first publication of the S&P Indices Versus Active Funds (SPIVA) U.S. Scorecard in 2002, S&P Dow Jones Indices has been the de facto scorekeeper of the ongoing active versus passive debate. The Scorecard has been extended to other countries including Canada. The SPIVA Canada Scorecard measures the performance of Canadian managed funds against their respective benchmarks over various time horizons, covering actively large-, mid- and small-cap as well as international and global equity funds. This is the largest study of its kind focused on Canadian funds. Perhaps not surprisingly, Canadian banks and asset managers don’t bother producing similar research.

According to the SPIVA Canada Scorecard, a cross-category average of 90% of active funds underperformed their respective benchmark index over the past 10 years. There has been some variation across categories, but not much as the graph below indicates.

What is more, underperformance generally increased as the measurement horizon. This data should give pause to any mutual fund investor.

What is more, the few funds that manage to beat their benchmark have likely done so based on sheer luck. Genuine skill is more likely to persist, while luck is random and fleeting. Thus, one measure of skill is the consistency of a fund’s performance relative to its peers. This is also something that the Scorecard measured. It looked at the consistency of a fund’s performance and found that, regardless of asset class or style focus, active management outperformance is typically relatively short-lived, with very few funds consistently outranking their peers.

As a matter of fact, the percentage of funds who were in the top half of their peer rankings as of June 2018 and remained so over the following years was smaller than what would be expected under a random distribution of returns.

This suggests not only the lack of skill, but negative skill. Yet somehow there is over $17 trillion still invested in mutual funds generating billions of dollars in management fees for their promoters. While this is the case the investment industry will fight tooth and nail to keep the active versus passive debate going regardless of the evidence.