There has been a lot of talk about inflation this year. Looking at the data, the story of the recent rise in inflation is not particularly complicated. Yet, there seem to be misconceptions about its origins. I think it is important to understand what caused inflation as this could give us an idea when financial markets could find a bottom.

There are three main culprits that get cited in financial media. I’ll tackle them in order of importance.

There’s a famous quote by the economist Milton Friedman that goes like this: “Inflation is always and everywhere a monetary phenomenon in the sense that it is and can be produced only by a more rapid increase in the quantity of money than in output.” This should not be controversial. If the amount of money in circulation goes up faster than the amount of goods available for purchase, prices will go up. Below is a graph examining money supply growth and inflation over long periods of time. There is a clear correlation. 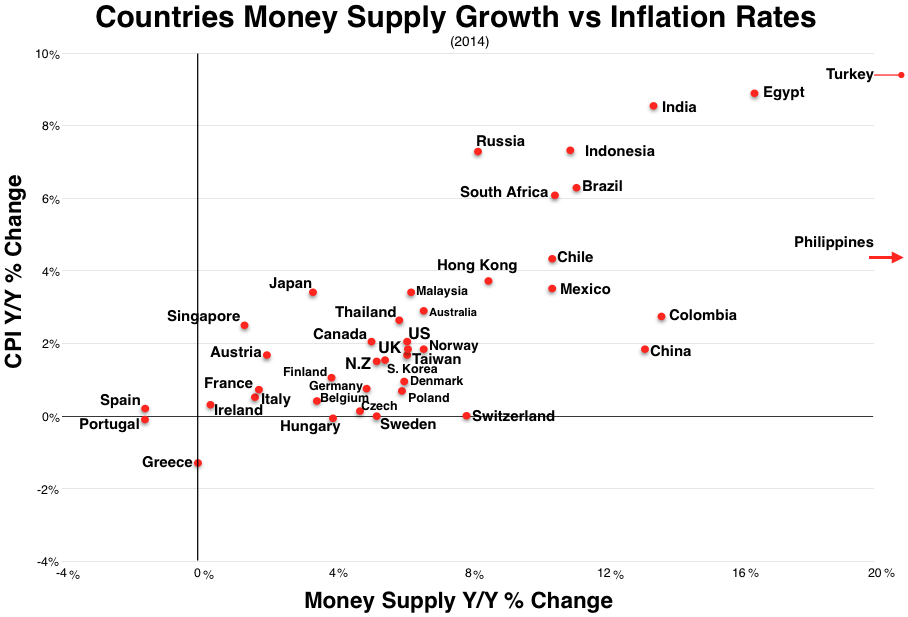 From February 2020 through March 2022, the Federal Reserve in the States backstopped financial markets by keeping interest rates near zero and creating $4.5 trillion in new liquidity through a process called quantitative easing. This more than doubled the size of its balance sheet and led to a boost in asset prices. The same happened in Canada. The Bank of Canada’s balance sheet nearly quintupled, from $120 billion in March to roughly $550 billion by the end of 2020. At the same time, the federal governments in both countries distributed much of these newly minted funds directly into the checking accounts of individuals, businesses, and local governments. This spurred spending, debt repayment and drove record corporate profits.

This was by far the main reason for the sharp spike in inflation.

Fiscal policy is the use of government spending and taxation to influence the economy. It is widely discussed in the news, but it doesn’t affect inflation on its own. This is because government spending in excess of tax revenue creates government debt, but it does not create money. However, fiscal policy can work in tandem with monetary policy to increase inflation. When the federal government runs a deficit, it spends borrowed money. It can only borrow if the central bank creates favorable financial conditions. The bank’s interest rate and liquidity policies will determine the government’s cost of borrowing as well as the total amount that could be borrowed. In this sense, fiscal stimulus plays an important role in pumping money in the real economy, but it must be facilitated by monetary policy.

Global supply chains seem to be the main culprit for inflation as cited by pundits. The data doesn’t support this, however. Despite the logistical challenges during the last couple of years, supply chains produced more goods than ever. In real terms, Canada and the US are still consuming far more goods than the pre-pandemic trend. Demand grew because spending was redirected away from services towards consumer goods, and because personal incomes went up due to fiscal stimulus discussed above. The problem was not that supply chains failed, but rather that there was excess demand for goods.

All of this is important because if monetary policy is the main cause for inflation, then it will be the main cure for it too. This is why interest rates have been going up, and financial markets have taken a beating. As I am writing this message, the 2-year US Treasury Bill is paying 4% annually. This hasn’t happened since 2007.

As a result, 2022 so far has been one of the worst years in financial markets ever. The value wiped off capital markets stands in the trillions and is rivaling the financial crisis of 2008. Major equity markets are in bear territory (down 20% or more). Fixed income markets are down in the double digits which is unheard of, and real estate markets both in the US and Canada are getting clobbered.

However, there is one silver lining. The recession hasn’t even happened yet, and when it does happen, it will have to be a pretty big one to justify such a sell-off.

This is not to say that markets have bottomed, but we are likely getting there. What is more, even if there is another big flush, the potential rebound to where we are today will likely happen quickly.